Silver, a commodity signifying wealth and prosperity, brought hardships to the doorsteps of labourers mining at Potosi. The Spaniards, desperate in their pursuit of silver, were responsible for the loss of 8 million lives from the 16th to 18th century (Flannary and Dean). Potosi’s reputation of mass tragedy led to its moniker of ‘the mountain that eats men’ (Forero). The cost at Potosi was so tragic that it resulted in one of the greatest human rights violations in Latin-American history; yet, in comparison with the Gulag and the Holocaust, it has remained relatively unknown. The story of silver started in 16th century Europe during the Age of Exploration, when European nations competed for political dominance through the colonisation of nations worldwide.

In South America, an abundance of silver was discovered by the Spaniards. The Spanish Empire profited immensely from the mining of silver through the implementation of high tariffs. At first, the Spanish Crown politically thrived as it succeeded in expanding the empire. At the time, there was a high demand for silver worldwide. The Spaniards capitalised on this demand; profiting by exploiting the labourers.

The Tragic Exploitation of Labourers

The mining of silver led to the exploitation of labourers in Latin America. Silver mining was demanding work, as such, if those who ran the silver mines used paid labourers, silver wouldn’t be as profitable. A group of male adult workers, the Mita, were drafted into working at Potosi. “Each year the Indians of the region stretching from Potosi to Cuzco had to send roughly a seventh of all adult males to work in the mines and refining mills of Potosi, a number estimated at about 13,500 men. It took them two months to cover the 6oo-mile journey across the Andean altiplano” (Brading and Cross, 558). The mines in South America, “relied upon free labor, supplemented by an assortment of slaves, some Indian, but mainly African, suitable for work in the refining mills” (Brading and Cross, 560). These workers were, “wretched, naked, ill-treated ” (Braudel, 197), a heavy cost for the Latin-American natives who were milked by the Spaniards. The exploitation of the workers, “permitted production at Potosi alone to soar far beyond the contemporary total for all New Spain” (Brading and Cross, 560). Since mining at Potosi had higher productivity because of the use of free labor, it produced a higher profit than the rest of South America. The Spaniards gained substantial revenue at the expense of the Mita.

Silver: A Boon on the Spanish Empire

The fiscal benefits attained through the silver trade aided the Spanish Empire in her expansion, thus politically benefitting her. The empire profited because of the abundant supply of silver as “Latin America alone produced about 150,000 tons of silver between 1500 to 1800” (Flynn and Giráldez, 202). Access to silver provided the Spanish with capital to fund her wars. The Spanish Crown reaped enormous profits through the taxation of silver, as it was a lucrative business. “The Crown levied a heavy tax on all silver produced … (It) greatly profited from its control of the mines” (Flynn and Giráldez, 210).  The money gained from the silver trade helped fund Spanish wars worldwide. Without the trade of silver, “it is hard to imagine how Castile could have financed simultaneous wars for generations against the Ottomans in the Mediterraneans; Protestant England and Holland and the French in Europe, the New World, and Asia.” (Flynn and Giráldez, 211). The fiscal profit which the silver trade yielded politically profited the Empire. The Spanish Empire relied heavily on Potosi because it “produced more silver than all camps of New Spain combined, it also yielded the Crown far more direct profit. Naturally, once the rich ores were exhausted, miners found this fiscal burden increasingly onerous.” (Brading and Cross, 561) In the beginning, the income gained from silver sustained the expansion of the Spanish Empire. 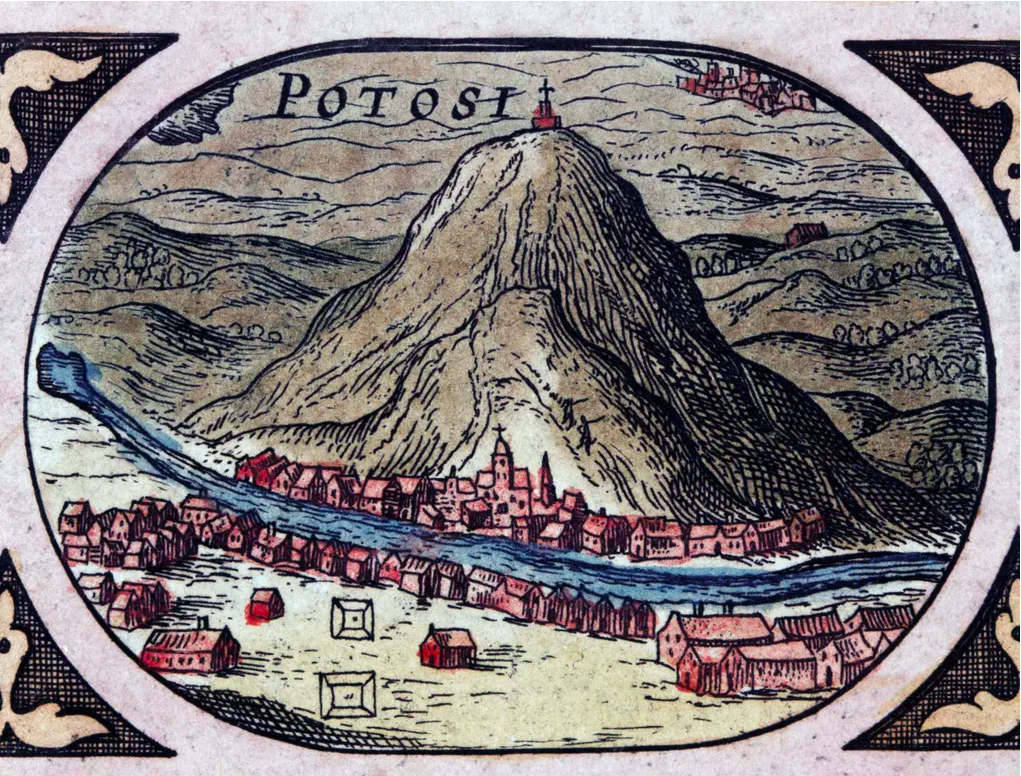 “For the powerful emperor, for the wise king, this lofty mountain of silver could conquer the world.” Read the engraving on an ornate shield sent by Spain’s King Felipe II in 1561 as a gift to the city of Potosí” (Greenfield)

The Tables Have Turned…

Once the supply of silver was depleted, the Crown wasn’t able to fund her costly wars; going through multiple bankruptcies leading to the end of the Spanish Empire. The price of a commodity is determined by supply and demand. There was a plethora of silver from Spain, however, the demand for silver plummeted, because there was a profusion of it in the market. “It became a glut on the market and the price of silver dropped alarmingly.”(Flannery and Dean) The monetary value of silver continued to decline and to compensate for this, more was pumped into the market. However, this had an adverse impact, as prices kept dropping because the demand for silver was dropping. “Silver’s declining value affected the Crown so profoundly that interest payments on Castile’s federal debt alone was the equivalent of at least ten years’ revenue eventually exceeding total crown receipts” (Flynn and Giráldez, 212 ). Since the New World mines provided the financial basis for the Spanish Empire, the depletion of the mines meant that Spain’s financial basis eroded. “Spain experienced multiple bankruptcies in the late 16th and early 17th century during a time of record silver production, because the value of each unit of silver continued to decline.” (Flynn and Girladez, 212 ) This had a political cost on Spain, as when the supply of silver depleted it had no little to no fiscal support. Consequently, Spain wasn’t able to fund her wars, hence vanishing as a serious Western power. Ultimately, the sun set on the Spanish Empire because she wasn’t able to diversify her exports.

All of these Events Happened Centuries Ago, Why Should We Care?

Some economies to this day are reliant on one commodity. An example that springs to mind is Botswana’s reliance on diamonds; approximately 70% of the government’s revenue comes from diamonds (Mbele). As seen with the Spanish Empire, this type of economy is prone to financial ruin as it depends on the value of just one commodity. The importance of diversifying one’s economy is pertinent as it poses a major threat to those who solely rely on one product. If a nation’s economy is reliant on the fluctuating prices of one commodity, changes in value could cause significant financial ripples across the nation’s economy. History is taught so that the mistakes we made aren’t repeated, however, contemporary conditions at Potosi remain inhumane. These workers have, “no lighting, no safety regulations or inspectors, no modern rail cars and no pumped-in oxygen, leaving miners to inhale fine deadly dust” (Forero). These conditions mirror medieval times, begging the question: how long will workers continue to be exploited for monetary gain?

Hi, my name is Avni, and I am a highschooler studying in Singapore. My favorite author is Neal Shusterman, who wrote the Arc of the Scythe series. I get excited about learning new things. Consequently, I adore writing about things that I previously did not know much about. Additionally, I love helping others. It could be through service or by simply helping another with a math question; I genuinely find joy through aiding others 🙂